THE ALBANIAN COMMUNITY OF CLEVELAND, OHIO 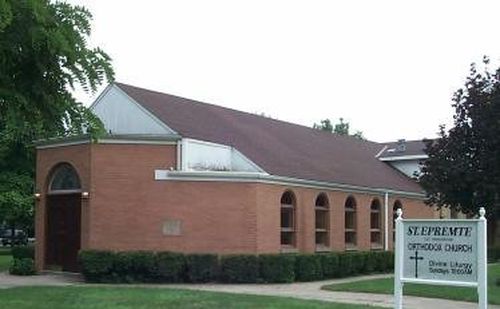 The first large group of Albanians to settle in the Greater Cleveland area arrived in the early 1900’s. The group was predominantly of the Easter Orthodox faith. Many of these first families took up residence on the southwest side of Cleveland and Linndale, specifically in and around the area of West 117th Street and West Blvd.

After coming to America and going to school to learn the English language, Albanian men and women opened up businesses on Cleveland’s West Side. Many of these businesses were service oriented. In addition to service related jobs and business, many Albanian men worked in industry, the trades, or on the railroads. Meanwhile, the women predominantly were homemakers, raising the second generation of Albanian Americans.

In 1938 the Albanian community came together to buy a parcel of land located at 10716 Jasper Avenue, and in 1953 were able to build and establish the Parish of St. Epremte Albanian Orthodox Church. In 1964, after using the original hall as a church and a social center, a new church was built as an addition to the existing structure. St. Epremte became the conduit for all denominations of Albanians in the Greater Cleveland community. The church and hall continue to be used today, and is a beacon to the faithful of all religions, that the Albanian community is well established in Greater Cleveland.

The second wave of Albanian immigrants to come to America came during the years of 1945-1960. This group consisted of a more diverse cross section of Albanians. The vast majority were Albanian Muslims seeking to escape communism. The third wave of Albanians who came to America, from 1961 to present, were largely from the Albanian areas of Kosovo and Macedonia, and consisted of Muslim and Roman Catholic faiths. In addition to settling in the Cleveland area, these Albanian immigrants also settled in New York City and Detroit.

Building a Community with Pride and Patriotism

The Albanian’s of Cleveland are a proud and patriotic people. Many Albanian Americans served in the United States Military during World War II. Almost every first migration family had loved ones who served in either the European or Pacific theatre during World War II. Many young Albanians were involved in the Normandy Invasion and served under General Patton throughout the European campaign. This proud service was continued by the young men and women who served in Korea, Vietnam, Desert Storm and also the wars in Iraq and Afghanistan. This service to the country is a great testimony to the fact that while their heritage may be Albanian, they were passionate Americans.

The Albanian community of Cleveland today has made great progress by establishing The Albanian American Association of Cleveland, which helps all immigrants from Albania to get established in our area. This organization helps the newly arrived to find jobs, buy homes, and helps to establish educational needs for all of the new immigrants. The entrepreneurial spirit remains strong with new Albanian immigrants, who continue to quickly establish and operate businesses in the Cleveland area. The men have also followed in the footsteps of the first wave of immigrants by also finding work in industry. The more recently arrived women have expanded their footprint to reach success in sales, as teachers, accountants, and other service oriented professions. Proud to serve not only their country, but also their city, many Albanian men and women work in the emergency service occupations such as the fire service, the police service, and emergency medical services and security services.

While we could single out many individuals and families that have been responsible for the great success that has been achieved, it’s our community as a whole, each and every member and family that has worked collectively to establish the rock solid Albanian community within the city of Cleveland.

St. Epremte Church is very proud of all the families that make up our Albanian community, and we are especially proud of some very famous Albanian individuals such as Mother Teresa, the late Bishop Nikon of the Orthodox Church in America, and the late Bishop and Albanian statesman Theofon Noli.

The Albanian community of Cleveland will continue to selflessly serve the Cleveland area in any way possible, and with the grace of God our numbers will grow and we will work for the good of all the people in Cleveland and throughout our country. We are proud to be Americans of Albanian descent, and we are proud to be citizens in the best location in the nation, the north coast of America, Cleveland, Ohio.

The Albanian community of Cleveland, and throughout America, has proven to be good citizens, industrious businessmen, honored veterans, and true patriots to the ideals of America. They have provided their children with the opportunities and joys only America can offer and have proven that they love their new country, while maintaining a love of their Albanian heritage.